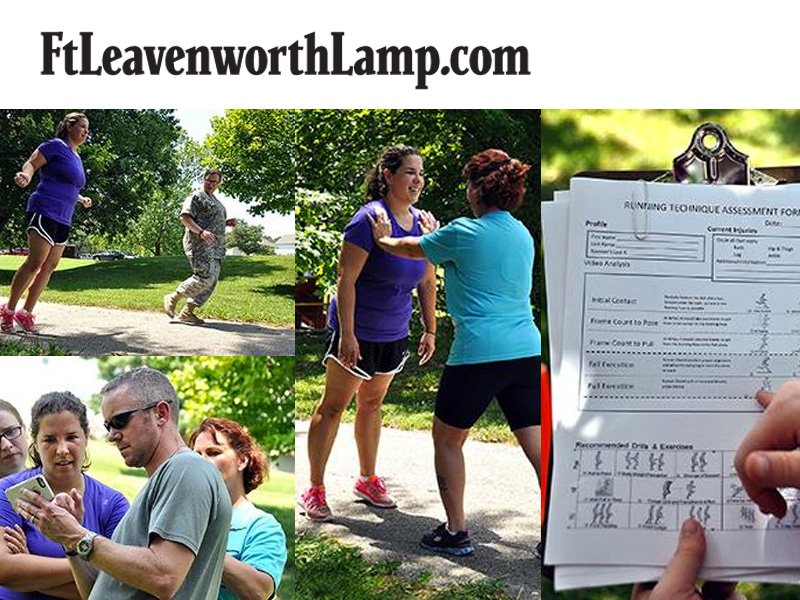 The Munson Army Health Center physical therapy staff led the first session of a running clinic open to the Fort Leavenworth community July 19 by Hancock Pool. The clinic teaches running technique through the Pose Method of Running aimed at improving and preventing injuries.

The Pose technique concentrates on the runner’s pose, fall and pull elements and uses gravity as the primary force for movement instead of muscular effort. “It’s a type of running that allows you to run using less energy,” said Spc. Amelia Sharpe, physical therapist technician at Munson Army Health Center.

According to the Pose website, “The Running Pose is a whole body pose, which vertically aligns shoulders, hips and ankles with the support leg, while standing on the ball of the foot. This creates an S-like shape of the body. The runner then changes the pose from one leg to the other by falling forward and allowing gravity to do the work. The support foot is pulled from the ground to allow the body to fall forward, while the other foot drops down freely, in a change of support.”

MAHC physical therapy staff were trained and certified on the technique in December during a three-day course at Fort Leavenworth. The technique has been used on installations across the Army and has shown positive results, said Kyle Parks, physical therapist at MAHC.

“One of the things that kind of resonated with me (about the Pose Method) was one of our instructors had been up at West Point and did a case series,” Park said. “I think it was on four or five cadets up there who were about to have surgery for Chronic Exertional Compartment Syndrome and by doing this (method) all five of them avoided surgery. That’s the kind of a condition that’s going to slow down your career. Oftentimes you don’t get back to running anyways so that was one of those things that was kind of an eye opener for me.”

The physical therapy staff at MAHC have been using the technique in the clinic for patients but wanted to introduce it to more people, Parks said.

“This is trying more to reach out to the community and say, ‘Hey, if you need help with your running, come see us.’”

Want to join the discussion?
Feel free to contribute!

This site uses Akismet to reduce spam. Learn how your comment data is processed.

Here’s how to prevent runner injuries

You Run Like Sh*t: My Pose Journey
Scroll to top